I know that I always say, “you should make this” but this time I really mean it. I promise, you’re gonna love it.

Until yesterday, I hadn’t really been that into grilling. It wasn’t that I didn’t like grilled things it was more that lighting it and standing in front of fire seemed like such a production.

I know, I know, this coming from a girl that has no qualms spending 25 minutes babysitting a risotto.

Last night I conquered my laziness and I am happy to announce I am converted. The grill is fucking awesome. No pan to wash, speedy as all get out, and it felt especially nice to stand in front of the warm flames in this chilly Florida “winter.” I felt the collective eye roll of all northerners just now. WE ARE THIN BLOODED WIMPY PEOPLE OKAY.

If there was ever a meat born for the grill, its flank steak. It’s so thin and sinewy that you need a really screaming hot surface if you want to sear the outside without just completely turning it into shoe leather. It can go from juicy and delicious to tough and disgusting in about two minutes if you’re not careful. That’s not to say its difficult to cook, in fact, it’s pretty easy. It just means that you have to have the right tools.

Flank steak also loves a good marinade. Get a little acid in the marinade and the steak will not only tenderize, it’ll take in whatever flavors you put in there. Acid to meat is like a glass of wine to me. It loosens things up and makes us a little more palatable. BE CAREFUL with pineapple, though. I bet you can tell from this warning that a “here’s a time I fucked up” story is coming. You’d be right.

Once we left a flank steak in a pineapple marinade for a few hours, like you would with any normal marinade. When we cooked it… I’m sorry I’m trying shuddering through some horrible flashbacks… it was the mushiest, most gag-inducing texture I’ve ever had the misfortune of putting in my mouth. Turns out pineapple juice enzymes are the Hulk of marinade ingredients and breaks things down far faster than most. So please, I beg of you, if you decide to do a marinade with pineapple cut the time down to 30 minutes. You can still have great flavor and not eat mush.

MOVING ON. Citrus is my go-to. Lemon, lime, orange… all great stuff. I’ve been on an orange kick lately so this marinade had to have some fresh-squeezed OJ thrown in. Get creative with your spice mixes! Definitely throw some garlic in because we love delicious and hate vampires. 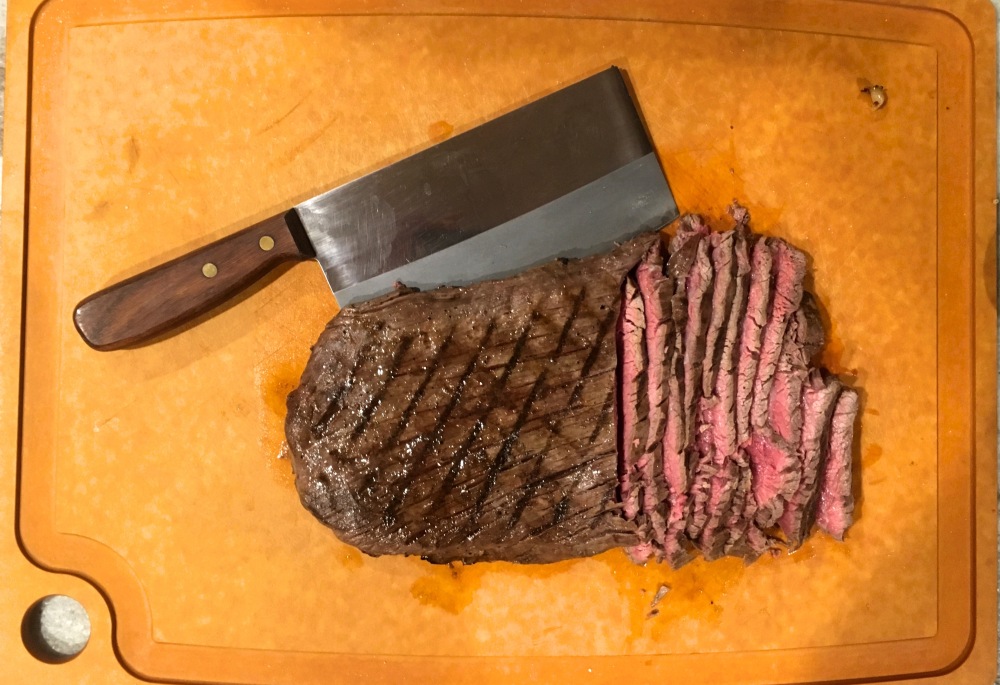 Not to toot my own horn (nah screw it this was awesome I suck in a multitude of other ways but not in cilantro sauce) but my dad said he would just like to be served a bowl of this sauce. He kept opening the fridge to taste it again. He NEVER gets that excited about food things. He loves food, don’t get me wrong, but he’s not particularly vocal about it. So this has an Arthur Rating of 10/10. Who needs a Michelin Star?

Orange juice will be a permanent part of my marinade arsenal from now on. I loved that it gave a fruitier flavor without being overwhelmingly acidic. The lemons gave it just enough. When it came together with the little bit of lime and herbiness in the sauce it really shined. Steak and spicy cauliflower with a smooth delicious sauce to cool it down? I’m here for it.

The cauliflower came out great, with the spicy smokiness of the chipotles and the earthiness from the cumin. I usually don’t like cauliflower because I find it bland as hell, but this recipe might have me converted. Arthur Review? “Mmm. Good. Better with the sauce.”

As I was eating it, I was thinking that this would be a recipe perfect for adaptation to a sandwich or tacos. Next time, when hopefully my fridge is looking less sparse, I think some grilled veggies, like bell peppers and maybe even asparagus, would be an excellent addition. It would also be a good method to adapt into a meal prep because it was awesome cold today for lunch. It’s a great party dish because its relatively cheap, quick and easy and also requires little to no clean-up. Whip out the paper plates and be lazy!

Whatever way you choose to make it, MAKE IT. It’s Arthur Approved.